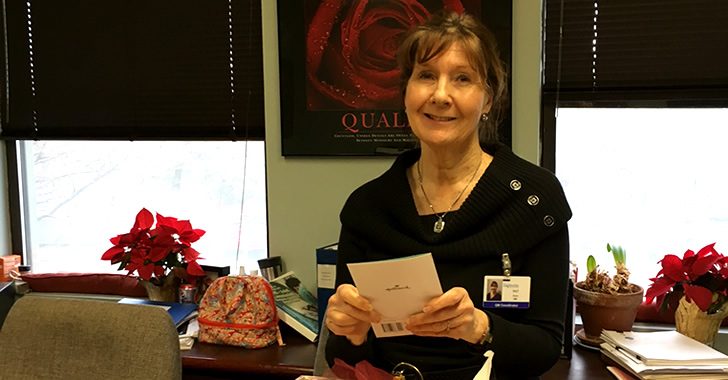 Many employees at Eagleville Hospital help it to function at such a high level on a daily basis. The contributions from the individuals in all departments synergize as one entity, and as a result, it serves as an asset to the entire operation. In particular, the longest tenured employees serve a distinct role. Some people label them – the mature workforce! Through their many years at the hospital, they have established a high degree of continuity. This gives them the experience necessary to overcome any obstacle, and complete their job every day at the highest professional standard. They are models of how the work should be done. An example of such an employee is Pat Ferro, a 33-year veteran of Eagleville most recently serving as the Quality Management Department Coordinator, who has just recently retired.

Ferro received her bachelor’s degree in education from Kutztown University, and after doing so, she began to search for some kind of employment opportunity. When she thought that she needed some assistance she turned to the long running job-hunting book series, What Color Is Your Parachute? In this book, along with the typical recommendation of scanning the classified ads in newspapers of the time, includes a suggestion to complete volunteer work at an organization or establishment. Ferro saw an article in a local paper about Eagleville Hospital seeking volunteer tutors and called for an interview. Arriving early for her interview at Eagleville, which Ferro says is an attribute she learned from her pursuit of her college major, she was convinced by staff to instead take a volunteer job in the social work department at the hospital, rather than the tutor position she had initially desired.

The year was 1983. It was the beginning of a long, storied career at Eagleville for Ferro.

The volunteer portion of her work only lasted six weeks, until she was offered a full-time position on December 5th of the same year. In the early years of her career, which involved a position as a direct service social worker, she pursued a graduate degree at Temple University in the field of social work administration. After receiving her master’s degree from Temple, she became the Admission’s Director at Eagleville; a position she held for 18 years, and considers her most rewarding during her tenure at Eagleville.

“It required oversight of the operation of the department and supervision of the staff,” Ferro said. “I was able to use the skills I learned in education, as well as my organizational skills, for training of the staff.”

Specifically, these skills allowed Ferro to hit the ground running. Several personal factors made her a good fit for upper-level positions, and taking on additional responsibilities.

“As the head of a department, I always felt the need to accurately communicate pertinent information, for the good of the order so to speak,” Ferro said. “I also think my interpersonal skills were very helpful. For the most part, I think I got along with everyone pretty well, which helps in the overall scheme of things in a hospital setting, since you’re interacting with a number of departments on a daily basis.”

She also commented on the nature of the rehabilitation field, and what makes it unique.

Ferro highlighted one of those challenges that stood out during the course of her career; the implementation of the first managed care companies in January of 1997.

“They were the first ones we dealt with, and they had certain protocols that we had to adhere to,” Ferro said. “In the Admissions Department, it was a bit of a learning curve for us. We had to familiarize ourselves with what was expected, with different types of insurances and such. It was a bit challenging initially, but we got the hang of it. Eventually, more managed care companies, such as Magellan, began to enter the arena.”

Of course, overcoming such challenges is made easier by having a competent, reliable staff as your peers, and Ferro acknowledges the relationships she forged with her co-workers, over the course of her 33-year career.

Likewise, co-workers of Ferro throughout the years have complimented her, and have fond memories of working alongside her at Eagleville.

“Pat has been extremely dedicated to providing high-quality care and assuring that care is provided in a respectful manner,” said Charlie Folks, Director of Community Integration and Strategic Partnerships, who had been a supervisor of Ferro. “As a side part of her job, she was always willing to search for belongings that patients had left behind and was very successful in finding them when no one else could! I wish her well in her retirement.”

Maryann Jordan, Director of Quality Management at Eagleville, shares a similar positive opinion of Ferro as an employee and peer. “While she didn’t have any direct responsibilities with me in our QM department, she was a lunch buddy,” Jordan said. “Pat dealt with a lot of patient families in a professional manner, and was relentless in her pursuit of missing belongings. She was widely recognized around campus by both patients and staff, and was never afraid to address patients regarding behavior and language.” It has been a long, successful career for Ferro, and as such, she is looking forward to retirement to pursue her recreational activities. She is aiming to increase her already regular exercise routine, and would like to spend more time gardening, which is one of her passions.

“I just like to be outside, working in a yard, planting flowers, and it’s just a nice hobby and a good way to spend time,” Ferro said.

One aspect of retirement that is a popular avenue for people to take up is traveling, since time is no longer consumed by work! However, Ferro says that it will not be the first thing on her agenda, because of her extensive traveling during her youth.

“People always ask me whether I’m going to be traveling during retirement, and my answer is always the same; I already did that when I was younger,” Ferro said. “I did go to Europe twice, two years in a row. In the early-70s, you could go there very inexpensively. For $125 you could have unlimited train travel in Europe, and it was quite the bargain. I would recommend it to anyone if they’re able to do it.”

Without question, Ferro’s contributions to the staff at Eagleville cannot be understated. The consistency in her work, coupled with her attention to detail, and unique skill set has been an asset to the hospital for the entirety of her 33 years as an employee, for any position that she has held. In any field, it is rare in this day and age to find the kind of loyalty and dedication that Ferro has provided, for such an expanded amount of time. Her retirement is well deserved, and she is equally appreciative of the opportunity that Eagleville has provided her.

“My employment here gave me a chance to grow professionally,” Ferro said. “Eagleville allowed me to do a lot of different things in my career, and hold a variety of positions over the years. I’m very grateful for that.”