Q&A with a Therapist: Jessica Fry Helps Her Eagleville Patients with Overcoming Trauma 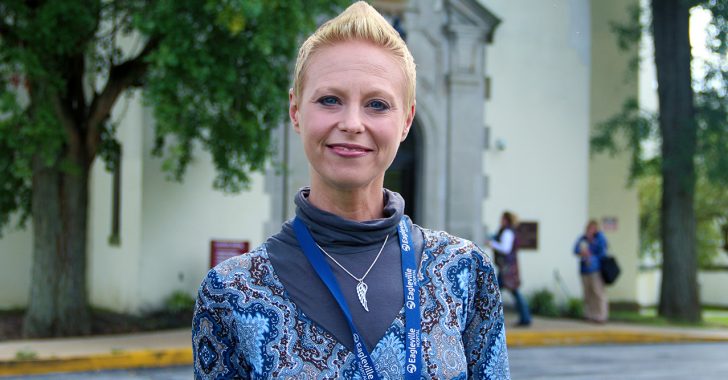 Jessica (Jes) Fry has been a therapist at Eagleville Hospital for more than 13 years. Much of her work today focuses on treating women with substance use disorders and alcoholism who’ve experienced severe trauma in their lives.

Jes herself is a self-described “trauma survivor,” though she’s also lost two sisters to substance abuse. “I live a happy, full and free life, and I want the women I work with to know that’s possible,” she says. In this Q&A, Jes explains how.

Is there a common set of characteristics among women who have experienced trauma?

They can have difficulty connecting with other people and trusting them. They also tend to have skewed beliefs about themselves and the world around them, which manifests in the form of low self-esteem. These women have been living with a fight-or-flight mentality for a long time, waiting for the next thing to happen to them. They never feel safe because of it.

We can’t change the traumatic event, but we can work at reshaping the reality they created in its aftermath, and that’s where the power lies. First, we have to help them create safety. I do that by teaching them to ground themselves in the now through meditation, yoga and other techniques.

And I’ll wait until they’re triggered because they’re able to see just how effective being grounded is. In the flashback, they’re vulnerable. But in the now, they’re safe. When I can teach them to stay in the now, substances may become less powerful.

Do your patients see their substance use or drinking as a means of protecting themselves?

They’re looking for safety in an unsafe way with something outside of themselves. Once they can do it safely from within, they’ll experience true safety””and the empowerment that comes with that.

People try lots of things to gain control over their trauma and create safety; substance abuse is just one of them. When they’re younger, many engage in self-harm. That’s about safety too, because they’re in control. They’re the ones inflicting the harm.

And that’s the thing with trauma survivors: they’ll often have multiple presentations””self-harm, an eating disorder, substance abuse””that are all enmeshed. When we remove the substance in treatment, another presentation may come to the forefront.

How else can their trauma complicate their recovery?

This may be a bit controversial, but I believe that almost everyone with an addiction has experienced some kind of trauma. Now, you can define trauma very broadly. It really comes down to how a given episode impacted someone and what they made of that moment.

Anyone getting high is just looking for relief, wanting to feel better or at least different. When you look at it that way, I don’t think trauma complicates recovery at all. It makes total sense. If you can get someone to understand that their substance abuse or drinking was just an unsafe way of coping and that it’s not working now, they’re often willing to do the work of recovery. The most important thing is learning to deal with their emotions in a safe way, and that’s what trauma survivors really want anyway. So it becomes their greatest gift.

Is this kind of treatment done in a group setting or on an individual basis?

All settings. In group, they learn to connect, trust and be there for each other. If they have a skewed belief about themselves””that they’re damaged or unlovable””group therapy allows them to recognize that the women around them with similar histories are lovable and worthy.

One-on-one therapy can be just as powerful. I follow their lead and let it unfold naturally. If they don’t want to talk about their trauma, I’ll honor that because survivors rarely have their boundaries honored.

At some point, though, there has to be a clearing. Trauma is like a thorn. After living with it for years, that wound has become infected. When they go to pull the thorn out, yes, it hurts, but it’s effective. There are some who’ve buried that wound so deep, they’ve forgotten it’s even there. They think that this is just how they are. So I proceed with treatment very intuitively.

Is it possible to ever move beyond the trauma in a meaningful way?

Yes. Survivors really can be happy, joyous, and free. It’s hard for some women to believe me, but it’s absolutely possible. One of the keys is to get them curious about who they are and what they want. I’m always asking, “Who are you and what do you want?” The answers to those questions give them something to move toward.

A lot of what’s in their way is not what’s happened to them necessarily but how they’ve perceived it. When you survive trauma, it’s life-altering. But it doesn’t have to define your life forever. I know the way out because I’ve travelled it myself. But I also have two sisters who weren’t able to discover it, so I know how easy it is to get stuck. I truly believe that anyone can heal. It’s more than healing; it’s a transformation. And it’s not only possible, but probable.