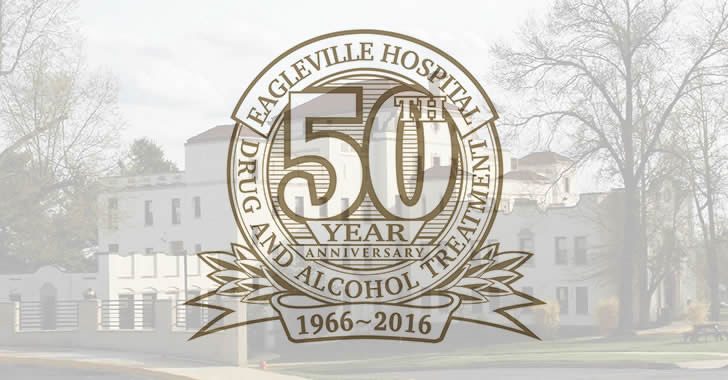 In the field of rehabilitation, the highest honor an institution can receive is positive testimony from the patients who made use of it. They are the ones who benefit from the services, and give credence to the methods, attitudes and practices of the hospital. If there was ever any doubt that Eagleville is one of the best facilities of its kind, those dissensions were put to rest on the afternoon July 28th, when the 50th anniversary celebration was held in the hall at the Patient Care Building. It was a place where former and current employees and patients congregated to share their gratitude to Eagleville; and they did so in spades.

Dennis Deal was a patient at the hospital in 1972, and eventually worked for Eagleville as a counselor and clinical coordinator after completing his treatment program.

“I came here to treat a very bad heroin addiction when I was 19-years-old,” Deal said. “My family dragged me up here, and something special and magical happened. I stayed and completed treatment, and ended up coming back to work here for 39 years.”

Through his experiences as both a patient and employee, Deal was able to see first hand why Eagleville is an elite institution in its field. “It was a very special and creative place, with a staff that had a special relationship with each other, and that came through to the patients,” Deal said. “That never changed; all through the years of modality changes, different directions and care, Eagleville’s family-like atmosphere made it so strong. That parallel process transcended from the staff down to the patients, making them comfortable here and willing to focus on the heavy aspects of recovery.”

Indeed throughout the anniversary event, which featured live instrumental music, a full buffet and over a dozen picture collages from years past, Deal’s sentiments were echoed all around.

Craig Lacey was another graduate of Eagleville’s program, later working at the hospital for 16 years. He recalls specific treatment methods that highlighted Eagleville’s creativity in the realm of rehabilitation.

“One I found particularly interesting was a form of Gestalt therapy where they had us beat pillows to get our anger and emotions out,” Lacey said. “This was aggression used in a positive way, rather than, for example, beating a wall when you were drunk. It was very effective.”

Lacey also recounted more traditional, counseled forms of treatment, but slightly different from the standard 30-minute or one-hour session. “We had what was known as marathon therapies, where we would go into a group on Friday afternoon, and come out of it on Sunday night,” Lacey said. “It would break down our defenses and really help us get in touch with our feelings. It was a very cathartic experience and it was very unique. I don’t think too many people at the time were doing what Eagleville was doing. They really pushed the envelope.”

These experiences bring to light the innovation that Eagleville has spearheaded throughout the years in the rehabilitation industry. In 1968, the hospital admitted its first patients for drug addiction treatment, and actually treated them in the same facility as patients suffering form alcohol addiction. This action broke new ground in the world of treatment, as narcotic use and alcohol abuse were seen as separate entities by most treatment facilities at the time. While this disposition is commonplace today, Eagleville saw the similarities years ahead of the rest.

One program in particular that discussed and praised at length during the event was the success of Eagleville’s Candidate Program. Making its debut in 1971 and lasting until the 1990s, was the first non-hospital residential treatment program. The basic structure of the program was six months in length, and combined residential therapeutic community treatment and a vocational program, which allowed for paid employment.

Charlie Folks is a graduate of the Candidate Program, as well as a 45-year employee of Eagleville and the current Director of Community Integration And Strategic Partnerships. He described the assistance that the program provided to him.

“I was able to go through the program and was encouraged by some of the senior staff here during it to pursue an education,” Folks said. “I got an Associate’s degree, then a Bachelor’s degree, and eventually ended up getting a Master’s in social work and becoming licensed.”

A testimony like that showcases how the programs and treatment at Eagleville can shape lives, and how effective they are at doing so.

Craig Lacey was another graduate of the program, and credits his success as a licensed, professional counselor to the time he spent at Eagleville. He advocated the treatment, saying that it allowed him to go back to school, and eventually receive a Master’s degree in the counseling field. Then again, it’s what has become to be expected from those associated with the hospital. It was evident throughout every conversation and sentiment put forth during the anniversary event. The human aspect of Eagleville’s mission truly became apparent; that forging relationships first, will lead to effective treatment, and produce contributing members to society.

A substantial reason for that fact, is that Eagleville is a true, first-come, first-served treatment hospital. John Machen, who is part of the non-profit How To Save A Life Foundation in Warminster, PA, explained how Eagleville’s treatment doesn’t discriminate, and is attainable for all.

“If you make a call here, and there’s a bed open, you’re going to get it,” Machen said. “It’s been that way for as long as I can remember. Eagleville is about the client, not so much the bottom line.”

Machen also commented on why Eagleville is unique in this regard, in the current landscape of addiction.

“Through the years, the face of addiction and treatment has changed,” Machen said. “It went from dealing with hardcore, long-time addicts from the inner city, to Main Line kids, who go from the pills to heroin very quickly. Along with that came a large profit margin for treatment. That’s why a lot of the rehabs in today’s market deal exclusively with private insurance; that’s where they get paid the most.”

Once again, this showcases the commitment that Eagleville has to their patients, and providing the best possible care and rehabilitation available today. It’s because of an attitude like this, that there are fifty years to celebrate to begin with. The reason why several hundred employees, patents and associates of the hospital turned out for the anniversary celebration, to commemorate the philosophy towards treatment that Eagleville has.

Additionally, it’s the people who remain the foundation of the establishment to this very day. Every employee is a key component of a facility that has been confirmed to have the ability to reach patients emotionally. Through listening to the speakers and the testimonies observed throughout the day, the camaraderie at Eagleville is something that is achieved through years of successful treatment. It has the ability to work in cyclical manner, and extend its assistance generations down the line. This therapeutic energy is formed by the people at Eagleville first, and the mutual respect they have for one another.

Charlie Folks made a comment that evidenced this truth. “The day I arrived here, I walked across the campus and something unique happened,” Folks said. “Every individual I passed said, ”˜Hi, welcome to Eagleville’. It’s a place where everybody cares about everybody else, and that’s not especially easy to find in today’s world.” The impactful nature of this kind of simple interaction cannot be underestimated. It is the foundation of what has allowed Eagleville to thrive in rehabilitation for the past 50 years. Here’s to 50 more.