Finding ‘flow’ and healing on the canvas 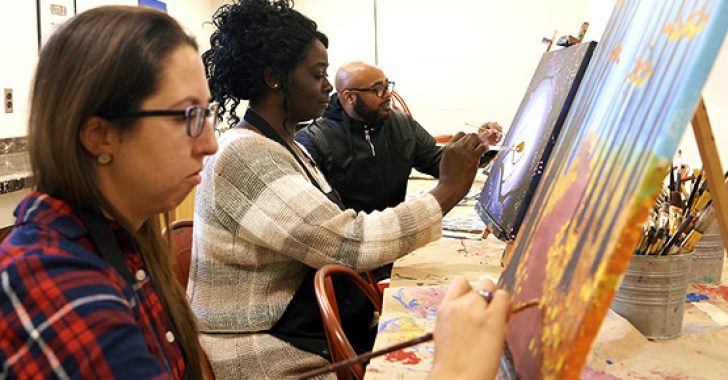 They enter the art studio, collect their tools””brushes, acrylic paints””and settle in front of their canvases. Besides the soft swish of brushstrokes and the hum of the overhead lighting, the room is quiet. Each artist has slipped into their own world.

After an hour that felt more like minutes, Lara Haagen, an art therapist and the Adjunctive Therapies Clinical Coordinator at Eagleville Hospital, gives the artists a ten-minute warning. Then a five-minute warning.

Her voice is soft; she’s trying to gently bring them back to awareness. The artists are coming out of a state that Haagen describes as creative flow. “In creative flow, you’re not thinking about the past or the future,” Haagen explains. “So many times, patients are asked to think about both. So when it’s just you and the paint and the canvas, it becomes a release.”

In this zone, the artist becomes absorbed by the act of painting to the extent that he or she loses track of every distraction””physical, mental and emotional. All that exists in that moment is the canvas and the brush.

Art therapy uses creative activity to process some of the stressful emotions and anxieties that can come up during recovery treatment.

“Art therapy is a time for patients to make decisions,” Haagen says. “Sometimes, people in recovery feel like they don’t have much choice. But in the studio, they’re encouraged to express themselves in a new way. They’re limited only by their own imaginations.”

Memories that can be too overwhelming to confront directly can usually be explored more comfortably through art. And in this way, it’s boiled down to the most basic (and oldest) kind of self-expression.

“People who have never painted before find it’s not as intimidating as they thought it was, and it becomes a real outlet,” Haagen says. “Most people stop making art after elementary school, so as an art therapist, seeing someone make that discovery is the best part.”

Getting into the creative flow

In Haagen’s group art therapy sessions at Eagleville, she leads a discussion at the beginning of the first session. During that introduction, Haagen sets the boundaries for the sessions to come.

They’re simple: When you’re in the studio, the studio is your world. She asks the group to forget any expectations they came with and be wherever they are. Haagen likes to think of a painting as a sandbox. When a person creates art, a lot of things can exist at the same time: feelings, time, experiences, relationships. The canvas, then, becomes a container for these things.

“Something I say often in the group is ”˜whatever is happening for you right now,’” Haagen says. “This practice is about acknowledgement and acceptance and sitting with the present moment, whatever that may feel like, and then translating it to the canvas. Whatever comes out, comes out.”

Each week, the artists come in and pick up where they left off, but maybe not in the same spot””and probably not with the same intention. Just like two thoughts rarely fit together, no two days in front of the canvas are the same, either. All that matters is that whatever lies inside””a deeply rooted memory, an untethered emotion, a hope””can find its way out.