In the key of recovery: Music appreciation therapy at Eagleville 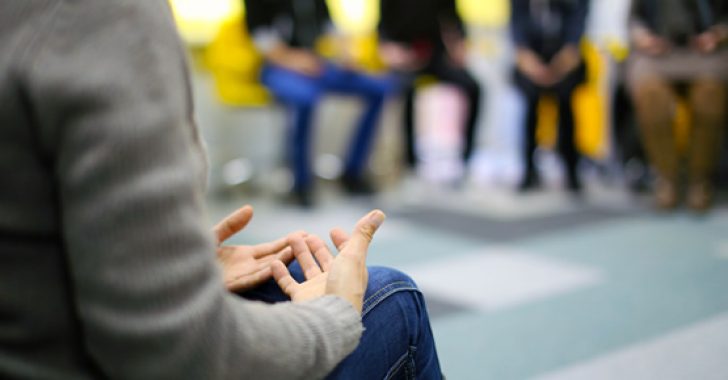 Even if you can’t tell right away, listening to music””a jingle, a lullaby, a ballad””has a profound impact on the brain.

That may not be accidental. Many historians believe that prehistoric music””usually created just with the voice””allowed our distant ancestors to “talk” before language was invented. Communication led to cooperation, and cooperation to tribes and societies.

Thus, human brains are wired early in our development to notice and respond to music. In addition, our motor and nervous systems respond to rhythm. That’s why a particularly powerful or meaningful sound may raise your heart rate or send shivers down your spine.

It’s also why many counselors and therapists make use of music in therapy.

The Effect of Music on Mental Wellbeing

Music is one of the most studied and understood kinds of creative arts used in therapeutic settings, according to Lara Haagen, Eagleville Hospital’s Adjunctive Therapies Clinical Coordinator. Thanks to recent advances in imaging technology””particularly MRI””scientists can watch and study the brain’s response to music in real time.

“Music profoundly affects our neurobiology as humans,” Haagen says. “Even though a lot of songs today have lyrics, we know that the melody, rhythm, tempo, texture and mood reach primitive parts of the brain that words alone aren’t able to access.”

Research have shown music’s ability to:

To offer these benefits to patients facing addiction and/or mental illness, Eagleville launched a four-week Music Appreciation group called “In The Key Of Recovery.” The group is led once a week by Mike Panzeter, an adjunctive therapy assistant at Eagleville and a performing musician.

Each group is open to 8-10 members, and the groups are separated by gender. During a meeting, each member chooses a song to listen to as a group and then discuss, which helps all members process the lyrics and their own internal responses to them.

“Music Appreciation helps patients connect with what’s happening to them,” Panzeter explains. “Patients are often surprised at the universality of their stories and emotions. One person may talk about a song that means a lot to them, and the other members react similarly and bond over their shared experiences. That reminds them that they’re not alone in their recovery journey.”

No two Music Appreciation groups are the same. Music ranges from happy to dark to hopeful to sorrowful, but Panzeter finds that certain songs and artists come up time and time again:

Panzeter even created a public Spotify playlist that curates some of the songs frequently discussed during the group.

“After we listen as a group and the members share and discuss with each other, we’ll often hear someone say, ”˜I’ve never told anybody that,’” Panzeter notes. “And there’s good reason for this: music allows us to connect with, and give words to, experiences that we may not have been aware of or able to verbalize before.”

Even the act of recognizing oneself in a song and feeling connected to the musician can spur growth.

“For patients who feel uncomfortable with talk therapy, music can move them toward using talk therapy more effectively,” Haagen says. “Everyone is at a different level, of course. For some, just feeling seen and witnessed””having their personal expressions and experiences validated””is therapeutic in and of itself.”

That may explain the group’s consistent popularity among Eagleville patients.

“Music Appreciation is one of the most popular groups we offer,” Haagen says. “Patients need a referral, so there’s often a wait list, and for good reason. We’ve seen time and time again how much it can impact a patient’s time here at Eagleville.”