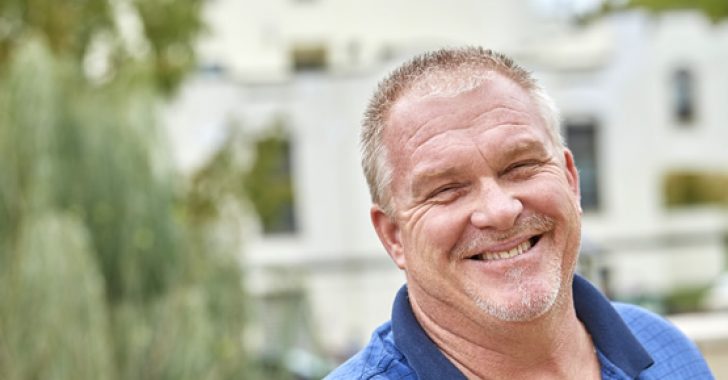 Mike Denczi remembers not fitting in as a child. A self-described “red-headed, freckle-faced, slightly overweight kid,” his one outlet was sports. Then drugs and alcohol beckoned at age 13, and by high school he was getting high every day.

“By high school my life revolved around getting high,” he says. “I managed to graduate in a decent spot in my class, and I played sports throughout high school. I stayed out of trouble, so there were no consequences for my behavior. I kept doing it.”

At the age of 22, Mike married his high school girlfriend, and three and a half years later their first child was born. That’s when things started to get out of hand.

“The drinking was horrible, and the blackouts were more frequent,” he says. “It started to take a toll on my marriage. Four years later when we had our second child, I thought things would settle down, but it just made things worse.”

Mike’s marriage ended three years later. As he was preparing to move out of the house, he made the decision to seek help. He checked into Eagleville Hospital on Valentine’s Day 1998 for a three-day stay.

“My insurance wouldn’t let me stay longer, so I did after-work rehab,” he says. “It was intense; four sessions a week for seven weeks. I was in a group and had a sponsor, and I stayed sober for 14 months. At that point, I went back to Eagleville to start a recovery meeting. We still hold that meeting on Sunday nights.”

Once he got help, Mike began to rebuild his life from the ground up. He worked his way through a divorce and a bankruptcy and met the woman who would become his second wife. His children grew up, and he earned an associate’s degree. He also got a new job that brought him full circle in his recovery.

“I got a job as a nursing assistant at Eagleville Hospital while I was still earning my degree,” he says. “I was later promoted to a recovery educator and then became a detox therapist. I’ve worked here since 2012, but I’ve been part of Eagleville for much longer.”

Today, Mike considers himself a part of the Eagleville family, a place where he feels comfortable professionally and personally. His original caseworker, Denise Folks, is now his colleague.

“I have a very strong connection to Eagleville from my three days here,” he says. “I still have all of my original paperwork, and I carry it with me wherever I go as a reminder of where I’ve been.

“Every day I work on the things I was taught at Eagleville””don’t use for any reason and practice the program in everything I do,” he adds. “There have been some ups and downs, but I’ve been blessed that I always had people in my life who were there for me.”