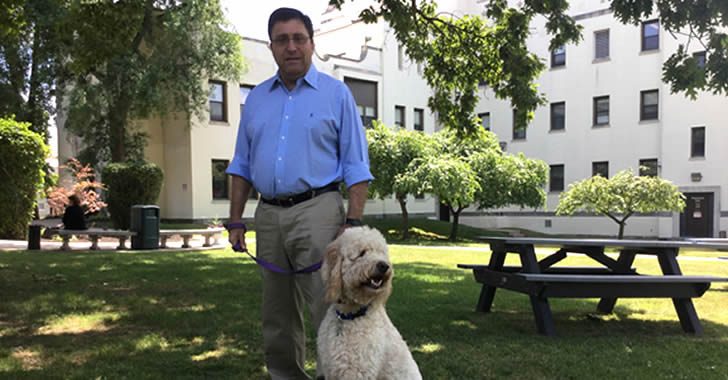 In the modern day, alternative methods of behavioral treatment have been receiving increased attention. While traditional therapeutic methods such as counseling, clinical medication, and so forth still have their place, they are no longer considered the only acceptable ways to provide treatment to a patient. Among these new treatment methods that are making waves is the use of therapy dogs, which can be seen working to a tee at Eagleville Hospital.

The premise of using a dog in the form of therapy is to provide the patient with the interaction of a tangible, loving creature. As there are obviously no animals typically allowed in the units, the hope is that the mere presence of the dog can provide a positive experience for them. Therapy dog owner Dave Gabel explained how his Goldendoodle dog, Bruce, performs this task on his weekly visits to Eagleville. Gabel and Bruce visit both the acute and geriatric units, staying for about a half hour in each.

“We’ll just sit there and the patients will come to us if they’re interested in seeing Bruce,” Gabel said. “Bruce will simply lay there. They can come pet him if they want, and he’s just very calm with them. I see the patients; their blood pressure goes down, and they’re very relaxed with Bruce.”

Indeed, this was the case when observing the interactions. Simply just walking across the Eagleville campus, patients would flock to Bruce outside, before he had entered the unit. He was a regular celebrity with passers-by, on nearly every square foot of the campus. It was a remarkable thing to witness, and was an example of the instinctual spark that the dogs can provide for the patients.

Once inside the unit, the interactions between Bruce and the patients continued. The patients could come inside their room on their own accord to see Bruce to play with him, or simply watch him. While in the acute unit, Bruce spent a lot of the time on his back, which Gabel explained is the position of “total trust” for a dog, meaning that Bruce was completely accepting and comfortable with his surroundings. He was gentle with the patient interactions, and it was clear that just being able to have camaraderie with an animal was a positive mental antidote for them.

This all sounds very simple, but not just any dog is permitted to perform this service. Since bringing an animal into a hospital involves obvious liability concerns, it is understandable that some kind of certification is required. Gabel explained that there is a necessary training protocol that therapy dogs must complete.

“Bruce went through a three-month training program with the Alliance Of Therapy Dogs,” Gabel said. “Only one third of the dogs pass their test. They basically have to know how to be okay in hospital environments, with noises, meeting new people and listening to commands. When I first got Bruce, he was a little hyper, so the training helped him become very subdued, and allowed him to interact with people much better.”

The training course certainly paid dividends, and Bruce was observed to be outstanding with everyone he came in contact with. Those on the Eagleville staff also confirm the positive effects on the patients. Acute Unit Program Manager Norm Vetter was able to provide insight on how he sees the use of therapy dogs as a beneficial treatment.

“When Bruce is here, people really respond very well to him,” Vetter said. “Bruce represents unconditional love, which many of the patients that we have on this unit are really lacking in their lives. A lot of our patients are dealing with depression as well as substance abuse. When they pet Bruce, or he snuggles up to them, they just come alive. It’s harder to resist a creature that’s welcoming and overall very loving.”

The use of therapy dogs on the acute unit at Eagleville came into play around late 2013, and is just one of the alternative therapies available to the patients. Arts and yoga therapy have also been used along with pet therapy, in conjunction with more traditional methods as well. Vetter explained the importance of the variety, and said that the therapy dogs fit right in with the plan.

“Right away we knew it was going to be something very positive,” Vetter said. “I believe in having a diverse type of therapy, because not everyone responds to one particular type. Having pet therapy come into the unit provides another dimension of how we can reach and connect with people.”

Vetter also explained that Bruce does almost as much for the Eagleville staff on his visits, as he does for the patients. Understandably so, as the environment is the same for them, and a visit from Bruce presents a deviation from the ordinary, perhaps at times mundane, daily routine.

In addition to Bruce’s efforts, Eagleville employs the services of another therapy dog, named Wilma. This Wire Hair Terrier is a seven-year therapy dog veteran, and owner Donna Biddle brings her in on a weekly basis. The goal is the same for this owner and dog combination, and Biddle described the positive effects seen on the geriatric unit when she brings Wilma in to visit with the older patients.

“A lot of times there’s reminiscence; they’ll talk about dogs they had while growing up, and their experience with other types of animals,” Biddle said. “The dog sometimes becomes a vehicle for discussion, so that the patients can feel more comfortable opening up. It’s a facilitator for conversation. You’ll see the patients come alive, when maybe other therapies aren’t working as well for them.” 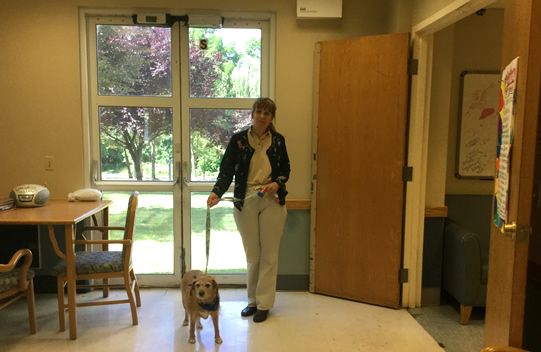 Through observation, Biddle’s comments rang true. The older patients were certainly comforted by Wilma’s presence, and had clearly looked forward to her appearance in the unit. The patients actively sought out Wilma, petting and playing with her. There was a distinct calming effect that Wilma’s presence brought upon the room.

Combined with Bruce’s success in the acute unit, both dogs proved that this method of therapy is applicable to more than one type of patient, with the positive effects reaching far and wide. The older patients in the geriatric unit found similar comfort in their interactions with the dog as the generally younger ones in the acute unit.

So, what does this mean in the end? First and foremost, it is evident that pet therapy at Eagleville has been a confirmed hit with everyone involved. This alternative therapy has proved itself as a worthy compliment to more traditional ones, providing well-applied variety to the types of treatment. Moreover, the positive effects are pronounced, and gives the patients a needed source of love, which can be sometimes difficult to come by in such a naturally solitary environment.

Whether Bruce and Wilma serve as a facilitator for patient-discussion, or as a tangible symbol of compassion, it gives everyone something to look forward to. Therapy dogs are here to stay at Eagleville, and such a natural treatment method can provide a spark of happiness in just about any patient.