Veronica Slack is Holding Tight to the Best Gift She Has Ever Received: the Gift of Recovery 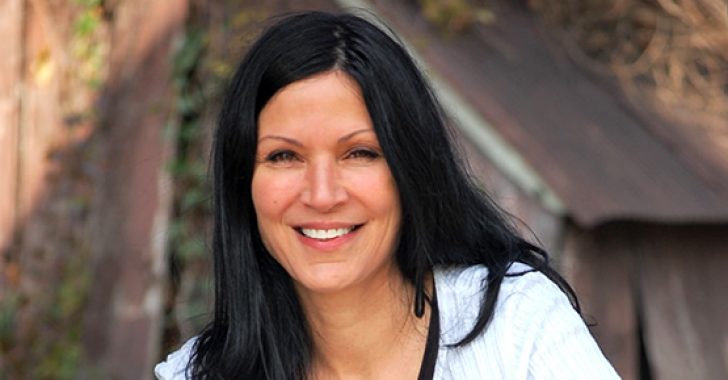 Almost from her first memory, Veronica Slack’s life was in total upheaval. Abused by her mother, abused and molested by an older brother, she started drinking at five. “My mother made me her drinking buddy. She gave me alcohol and took me to bars with her while my brothers and sisters were at school,” she says. “I remember I liked the pretty shapes of the bottles and the vibrant colors of the drinks with the little red straws.”

At 12, her parents divorced and at 13 she was raped by a former boyfriend. “That changed me,” she says. “I realized that I didn’t have anyone to turn to.” Until she did. At 15, she fell deeply for Bernie, a drunk and a junkie four years older than her. A year later, Veronica was pregnant and out of school. Her descent only picked up speed from there.

“I loved my daughter, no matter what I did or what I became,” she says. “She was the cheerful hope that got buried way down inside of me as I went from a recreational drug user to an IV drug user.”

She entered a detox facility””the first of six””at 19. Three days later, she left. Veronica, for all of her devotion to her daughter and Bernie, was living entirely for her next fix. “I no longer felt the effects of the drugs. I just wanted to keep the sickness away,” she says. “I feared withdrawal more than anything.”

Then came that cold day in November 1990. Veronica, now a wanted criminal, was walking along the side of a road in Chester County, Pa., strung out, no particular destination in mind, with her nine-year-old daughter in tow. Suddenly, a police cruiser was pulling up beside them. Just as quickly, they were ushered into the backseat and taken to the station for questioning. It wasn’t long before they realized her identity and the laundry list of warrants attached to it.

There was nowhere left to run. Veronica was going to jail. The officers gave her a moment alone with her daughter.

“My cold, dead heart felt a beat of humanity,” she says. “I got down on my knees, looked in her eyes, and said, ”˜Bernadette, I am so sorry for this life. I told you that someday I was going to get us out of this, and today is that day.’” She squeezed her tight and said, “Please be strong and hold on. I love you. I am coming back for you. You hear me? I am coming back.”

All the while, Veronica was anxiously calculating and recalculating. She figured she just needed to get through the night, make a decent impression on the judge in the morning, and then she’d be free to find her next fix. The judge, however, ordered her held until her court date and to Eagleville Hospital thereafter for treatment.

“When I realized I wasn’t going home I panicked,” she said. “I needed to get drugs somehow and decided to fake a seizure in the courtroom by throwing myself on the floor and starting to shake in front of the entire courtroom.”

Her plan worked. The sheriffs handcuffed her, turned her on her side and called an ambulance. At the hospital, Veronica thought she was going to receive drugs to ease her withdraw but instead she was medically detoxed. Within minutes of being placed on the IV, she was writhing in pain. The medicine was literally eating the drugs out of her system.

Weeks later, Veronica was deposited on Eagleville’s doorstep. Standing there on her own, for the first time since she was arrested, Veronica’s first thought was to run. Inexplicably, she didn’t. Instead, she entered the building, her first sober decision since she was a young kid.

Inside, Veronica found an environment that had always eluded her: clean sheets and towels, warm meals, a compassionate face around every corner. “They took me to meetings with people like me and educated me about addiction. They gave me medical treatment and medical care. They wowed me,” she says. “I had no idea people cared like this.”


”˜I found my voice being part of a group’

Veronica easily embraced individual therapy. When she shard an issue, her therapist listened and offered suggestions. It was a smooth back-and-forth. Group therapy, on the other hand, posed an immediate threat. A room full of addicts, one of them singled out at a time to share his or her most embarrassing behavior. So, Veronica slipped into survival mode. She learned to keep her head down, her face shrouded in her long hair.

The tactic was working until one day, Sandy, the counselor leading the session, homed in on Veronica.

“Veronica,” Sandy said, “I don’t know where it happened, when it happened, or why it happened, but somewhere, somehow, somebody told you it wasn’t OK to think.” Veronica says the comment sent her reeling straight back to the deep humiliation of her early childhood. She didn’t respond. She couldn’t.

“Here’s what we’re going to do with you,” Sandy continued. “We want you to wear your hair pulled back from now on. And we’re going to give you a clothes voucher for dresses that you will wear.”

Back in her room, Veronica tied her hair back and instantly felt vulnerable. She resisted the urge, though, to pull it back down. The dresses rewarded her courage. In them, she felt professional ”” even though she had never had a real job ”” and saw how pretty she was. Her confidence only grew from there. Overnight, there was a noticeable shift in Veronica’s posture. And in that next session, Sandy, maybe the only one in the room unsurprised by it, named her the group’s leader.

“Eagleville pulled me out of my shell,” Veronica says. “Being group leader helped me to speak up, stand up, and be a productive team member. I found my voice being part of a group.”

Sadly, tragedy struck while Veronica was at Eagleville and threatened to send her into a tailspin.

“I was called into the office and I knew something was wrong because the staff and Sandy were there,” she remembers “They told me to sit down and Sandy said, ”˜Veronica, remember we are here for you.’ All I heard after that was, Bernie is dead.”

Her mind exploded with a grief she had never felt, and she collapsed into a pool of sorrow as she mourned the loss of her chaotic life partner who had succumbed to an overdose. Veronica still marvels at the fact that Eagleville managed to hold on to her after this.

On the day of her graduation from Eagleville, Veronica confessed to Sandy that she was scared. She didn’t trust herself to not relapse. Sandy told her to find a meeting the next day and then another, and so on. And to keep going no matter what. Veronica walked into her first meeting and introduced herself exactly as Sandy had coached her: “Hi. I’m a drug addict with a desire not to drink.”


”˜If you are still breathing, you can still choose the road to recovery’

Despite Veronica’s desire to stay clean, she struggled with the demons of her past. She relapsed and shared this fact with her sponsor Pam and others at her meetings. “They told me to just keep coming back, and I did.”

Then one day, overwhelmed by the grief of losing Bernie, she took the train to Philadelphia and bought the same drugs that took him out. On June 7, 1991 she died on the floor of her brother’s bathroom. Fortunately, a friend from her recovery program found her in time and called 911. She was revived by paramedics and that night, received a strong dose of tough love from one of the men in her meeting group who had been looking out for her.

“He sat me down, pointed his finger in my face and said sternly, ”˜Veronica, you were dead! Not everyone gets a second chance, you’re a f’in miracle and you had better listen to me really good; If you don’t use your sponsor, work the steps, attend meetings and hang out with recovering people you are going to use within the next five days and be back in the streets living the same junkie lifestyle.”

This “scared the crap’ out of Veronica and was exactly what she needed ”” the cold hard truth, with love, from another addict. “His words kicked me out of transition and into full blown recovery.”

Veronica moved in with her sponsor, grabbed hold of the 12-step program and held on for dear life. She also relied more heavily on her Higher Power whom she said had been ever present throughout her life ”” particularly in times of pain and trouble.

Over time, she was able to get her daughter back from family and secure a job. Marriage and another daughter followed. Inspired by her respect and love for recovery, Veronica also began writing a book series for people who are “hurting, hard-headed, or too busy, like me.”

“I’m still holding on to the best thing that ever happened to me: the gift of recovery.”

In November 2017, Veronica returned to Eagleville to share her story of survival and recovery with others who are struggling with addiction. She also presented each of Eagleville’s clients with a copy of the first book in her series, “I didn’t ask to think this way, I just do,” to help them through their own journey.

“Reality set in when I walked through those doors,” she said. “I was overcome with gratitude for the hospital and its staff and a deep appreciation for the difference that Eagleville had made in my life. This was my opportunity to say thank you to Eagleville for all it had done for me 26 years ago.”

To read more about Veronica’s recovery story, learn about her book series or follow her blog, visit: https://www.becauseyoucan.co/.